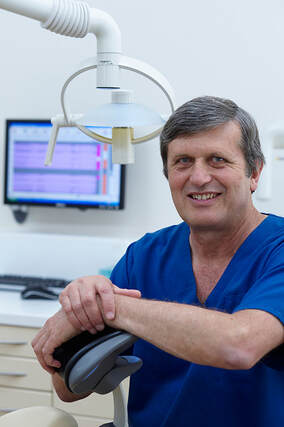 Dr. van Jaarsveld fulfils the role of diagnosing and treating diseases of the
gums and supporting tissues. With Dr. van Jaarsvelds’ vast experience in the
placing of Dental Implants, you are sure to be in the hands of an expert.
He qualified with his undergraduate degree from the University of Pretoria
in 1979 and went on to complete his post graduate degree (with honours) in
Oral Medicine and Periodontics in 1985 at the same university.
Since 1985 he was in private practice in Pretoria and at the same time
lectured part time at the University of Pretoria. Since 1996 he has worked in
the UK and Tanzania as a Specialist in Periodontics. In 2005 he was
appointed Honorary Lecturer in the Department of Periodontics and Oral
Medicine at the University of the Witwatersrand. He has lectured all over the
world on Periodontal topics and has been the external examiner to the
University of the Witwatersrand from 2001 to 2006.
Hennie is registered as a Specialist Periodontist with the General Dental
Council.
BACK TO MAIN TEAM PAGE